‹ Back
Discuss Forum  ›  Reports from the Field

As an A Blade of Grass Fellow in 2018, artist and activist Jordan Weber created 4MX Greenhouse—what he describes as a “sculptural and programmatic artwork” in North Omaha, Nebraska, a historically black neighborhood that continues to face poverty and social disenfranchisement due to redlining and segregated infrastructure in the city. Located on the site of what was Malcolm X’s birth home and what’s now the property of the Malcolm X Memorial Foundation, the Greenhouse’s programming is inspired by the civil rights leader’s work and teachings. Events at the Greenhouse focus on cultivating four pillars of health: self-empowerment and determination; soil and air cleansing at local superfund sites; spiritual reflection and meditation; and holistic health derived from food crops grown onsite.

Weber has partnered with the Malcolm X Memorial Foundation (MXMF), an organization that similarly aims to promote self- and community-determination in North Omaha. A Blade of Grass Editorial and Communications Manager Emma Colón spoke with MXMF Board Member JoAnna LeFlore, who manages programs at the Greenhouse, about the art of empowerment, responding to a neighborhood’s needs, and “doing it yourself.”

This interview has been edited and condensed.

Emma Colón (EC): Could you tell us a bit about yourself and the Malcolm X Memorial Foundation?

JoAnna LeFlore (JL): I’m from Omaha and have been involved with the Malcolm X Foundation since college. In 2013 after finishing grad school, I joined the board. My role has morphed from helping to organize events on a small scale to being the main contact person for public events at the Foundation.

We’ve been in existence officially as an organization since 1971. Our founder, Rowena Moore, was a civil rights activist whose family had a relationship with Malcolm X’s family. Eventually she acquired the original lot where Malcolm’s birth home had been, at 3448 Pinkney Street in North Omaha, and since then we’ve acquired the seventeen acres surrounding it. It’s become a haven in the middle of North Omaha; it’s a really peaceful green space.

EC: What are the Foundation’s major initiatives and goals?

JL: Once we acquired the land, we first had the goal of making sure this was truly a memorial space to Malcolm X, so that involved a lot of maintenance of the grounds, which board members and volunteers have been involved in. Recently, maybe a year before Jordan’s Greenhouse went up, we added a community garden, which has allowed people to take ownership of the space. With the garden, we’ve shifted our attention to not just taking care of the land, but making sure that community residents know that this is part of their space too. The green space has served as a tool to teach people how to feed themselves from the land and learn from nature. 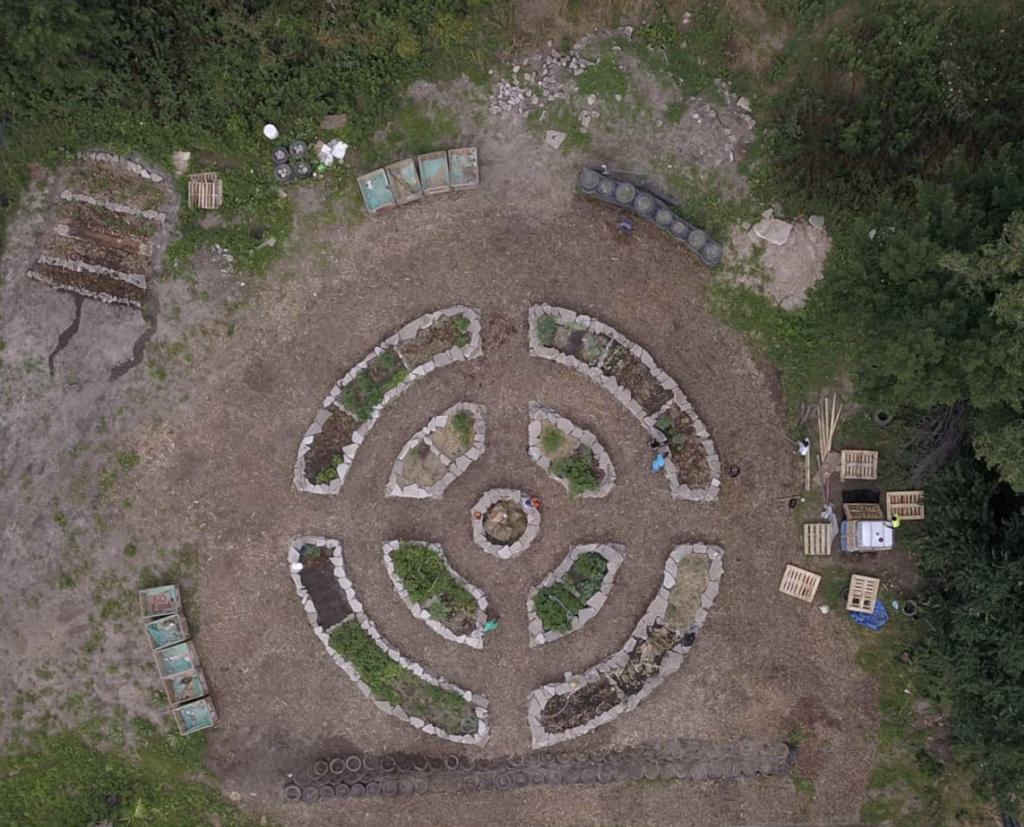 Another initiative is that we have a community radio station here. It’s a low-power FM station with a ten-mile radius—we broadcast twenty-four hours a day, seven days a week. We use it as a platform to spread the word and let people know that they can be heard. A lot of our talk show hosts are based in Omaha and talk about everything from cultural issues and politics to mental health and healing—we have a wellness hour on the station.

We always try to make sure that whatever we’re doing, we’re training the next generation to learn and activate themselves.

The garden and the radio station occupy a lot of our programming time. But another initiative of ours is providing space and organizational tools to people in the community who need to get the word out about something or organize a cause or event. It’s usually a response to community issues—if there’s violence in the community or if a local politician did something wrong, for example, we offer our space and help with strategy for folks who are responding to those issues.

The last thing is youth engagement. We offer leadership training and development, teach about the legacy of Malcolm X, and coach youth to lead their own movements. We always try to make sure that whatever we’re doing, we’re training the next generation to learn and activate themselves. In North Omaha, there aren’t a lot of opportunities for youth to be in leadership or learn about the radical history here. Omaha Public Schools don’t teach about Malcolm X—it’s not required reading or a special lecture in history or social studies. So we try to our best to activate that history and equip people with information. 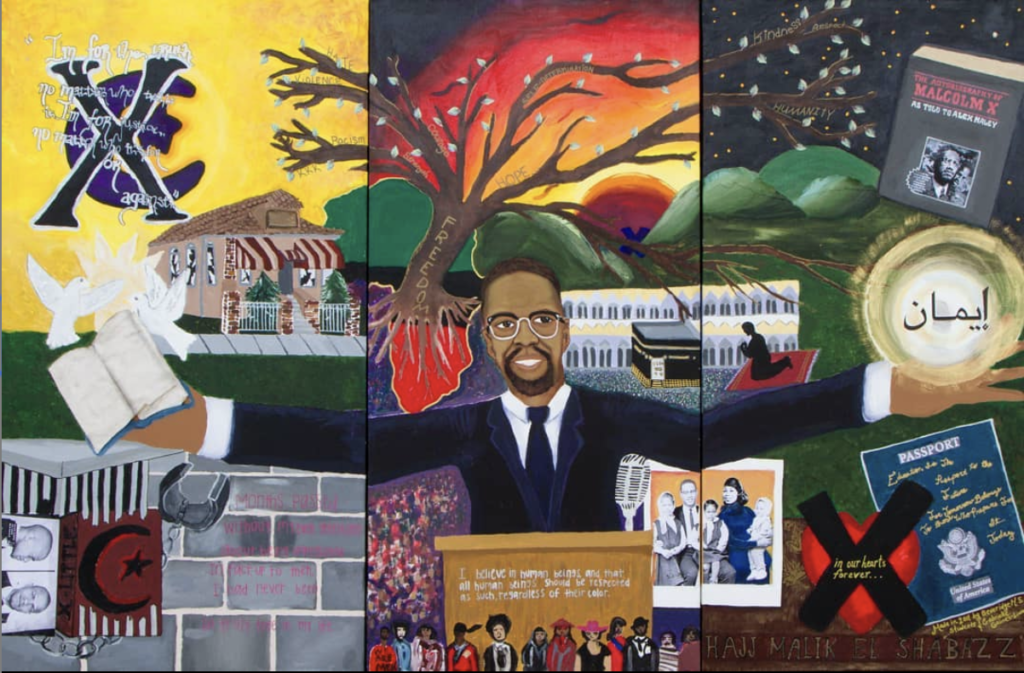 JL: That’s an excellent question. North Omaha has a lot of historical significance culturally, but also a lot of dissonance with the city government. There aren’t a lot resources in the area—we’re dealing with a lot of financial barriers. We don’t have a high percentage of black families that own property or homes in North Omaha. Transportation is an issue: this is a car city, but a lot of folks in need don’t have cars to get to better employment or to the grocery store. A lot of this has to do with just how the city is built. Some of the issues that we face in North Omaha are due to lack of information about all these systemic problems.

I think it’s a lifelong project of [the Foundation’s] to create solutions and continually discover what needs solutions. We’re about awareness, education, and activation: what can we do to inform people, and what can we do to help people be more self-sustaining? We’ve done lots of grassroots community-run programs because we understand that there’s more than one way to make a living, and we want people to share that information with each other. 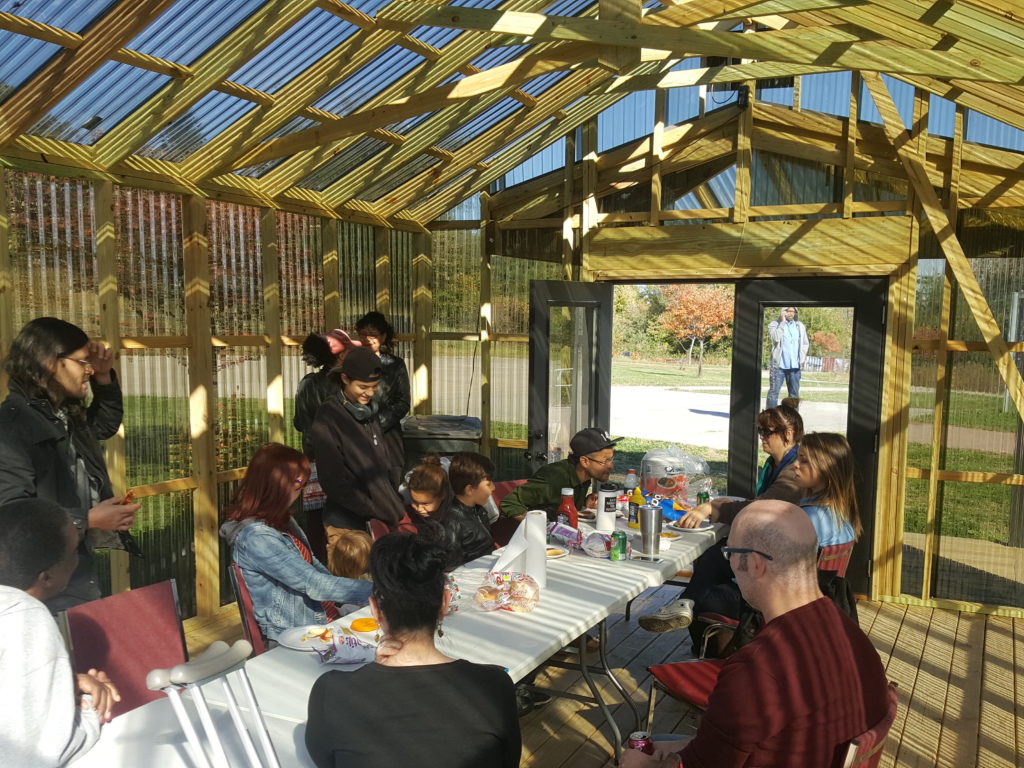 EC: Jordan [Weber] talks about the lack of grocery stores in North Omaha, making it a food desert. Do you see this as an issue in the community?

JL: In the past several years there have been serious efforts to try to alleviate that. I think the better conversation is lack of nutritional options and healthy food. We have a number of small grocery stores, but when you go into the produce aisle—it’s pitiful. In relation to the [size of the] population here, there could be way more options. If you go to another side of town, there are more options and people have the ability to drive to those stores. The grocery stores in North Omaha require a car or a couple hours on the bus.

EC: It sounds like your community garden and the Greenhouse are direct responses to that—the fact that you’re able to grow food fits into what you were saying about wanting to give folks the tools to do something themselves.

JL: Right. There are other neighborhood lots that have a couple garden beds too, but not many are connected to an organization that runs it or makes sure it stays maintained. We’re in the process of adding two acres of growing space [on the Foundation’s land]. There’s a good number of urban farm centers here [in Omaha] because Nebraska is an agricultural state, but connecting them to actual neighborhood associations or a garden project isn’t always an option. So what we do is a direct response to the lack of options, and we’re hoping to grow it and show other people how to buy their own lots and do this themselves. 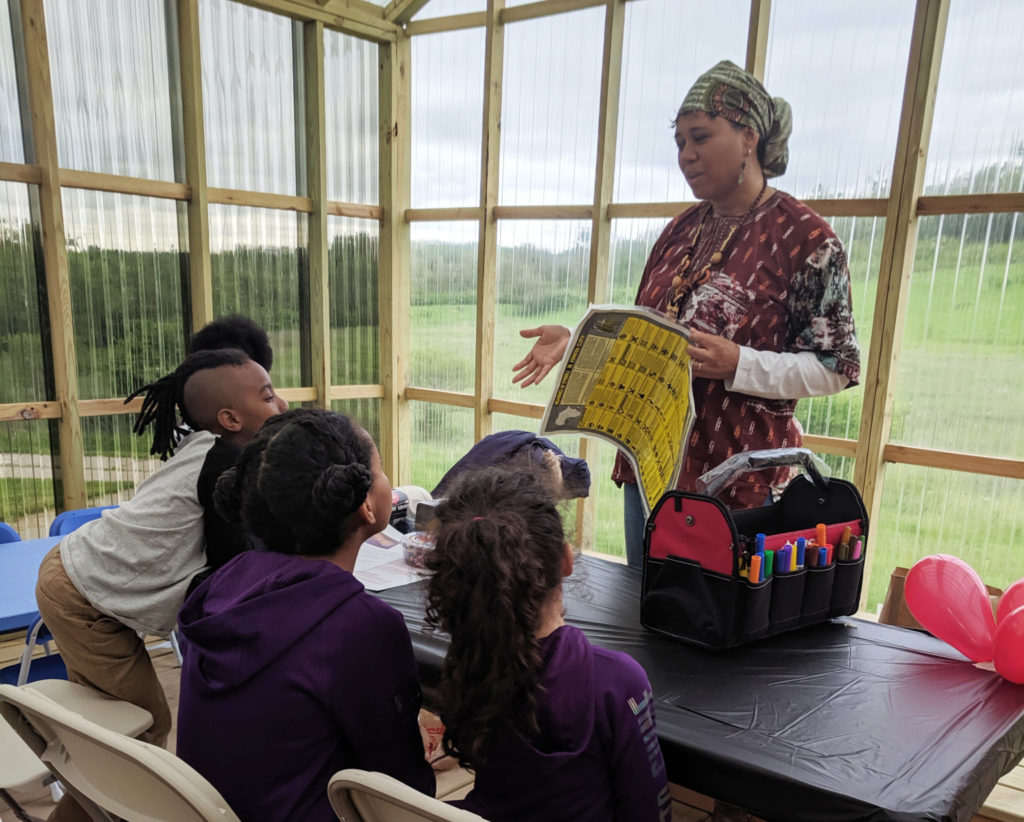 EC: How do you feel the Greenhouse is contributing to some of the larger goals of the Malcolm X Foundation, if there are indeed contributions outside of the food growing?

JL: The thing we really want to use the Greenhouse for is exposing people to how to activate a space, and doing it with intention. [The Malcolm X Foundation] has always been a historical location and destination, but because Jordan added the Greenhouse, with its porch, it’s now more of an invitation. My intention working with Jordan is to make sure the community knows they can use this space. The Greenhouse faces a pavilion where community can gather and have performances and share information. It’s going to draw attention to what we’re doing at the Malcolm X Center, but also highlight a possibility: if you have a backyard or a lot somewhere, you can do this too. It doesn’t have to be a greenhouse to this scale, but you can build something and gather people, and do it on your own.

EC: Are there any highlights from your collaboration with Jordan or meaningful moments you want to share?

JL: I’m excited about other people being excited. We really appreciate when artists or activists show up and just run their programs and make it happen. I think that [the Greenhouse] is going to excite people just based on the fact that they can be a part of it—that’s what the point of it is. I’m also excited about potential regional partnerships. Jordan being based in Des Moines is a new layer of our engagement [in that community], and I’m looking forward to helping others who may not be in Nebraska activate the Malcolm X Center. 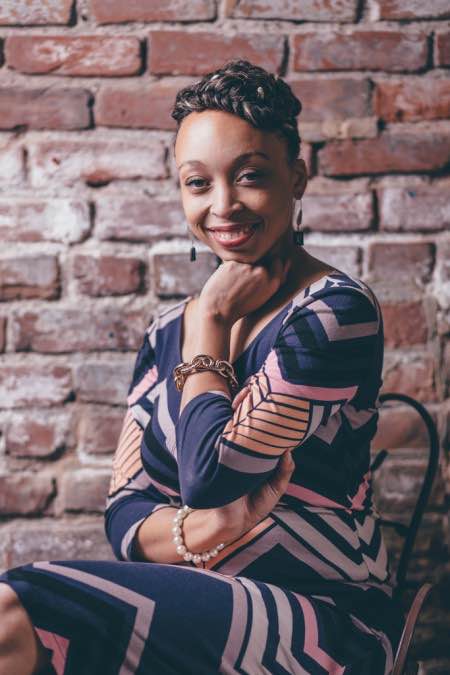 JoAnna LeFlore is a young communications specialist who prides herself in activating her community through the cultivation of creative entrepreneurs and arts-based programming. Inspired by her professional background as a writer and event planner, JoAnna promotes extensive artist collaboration and localized program development in the Midwest. She is known for helping her clients excel in working with organizations in community development, galleries as well as over a dozen creative entrepreneur brands. Previous clients have noted her as a trustworthy member of their team delivering healthy communications strategies in the realm of cultural event planning, copy writing and multimedia development.